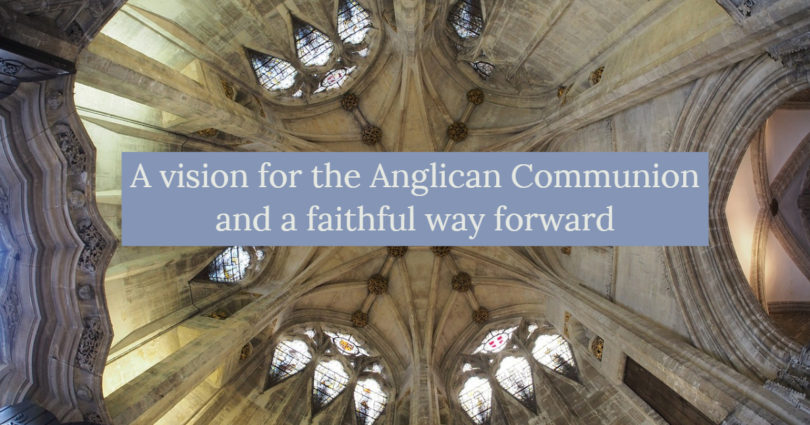 The following was written by the Rev. Canon Phil Ashey* and published at the American Anglican Council:

What do you want your church to be? What does God want it to be? I often think about this as the nature of my job, essentially, is to help the church, local and global. My hope and prayer for every church, including the entire Anglican Communion, comes from the book of Ephesians:

“And God placed all things under his [Christ’s] feet and appointed him to be head over everything for the church, which is his body, the fullness of him who fills everything in every way.” (Eph. 1:22)

“…built on the foundation of the apostles and prophets, Jesus himself as the chief cornerstone..”(Eph. 2:20)

“…joined together and [rising] to become a holy temple in the LORD…built together to become a dwelling in which God lives by his Spirit.”  (Eph. 2:21-22)

“His intent was that now, through the church, the manifold wisdom of God should be made knownto the rulers and authorities in the heavenly realms, according to his eternal purpose which he accomplished in Christ Jesus our Lord” (Eph. 3:10-11)

The American Anglican Council’s vision for what the entire Anglican Communion might become is also like Paul’s glorious vision in Ephesians:

“Within the global Communion of Anglican Churches our vision is to help leaders and national churches return Anglicanism to its biblical and apostolic roots, to prevail over all false gospels, to unite with other biblical and apostolic Christians and, together, to fulfil Christ’s Great Commission in the world.”

What if the Anglican Communion—the national and regional Churches all over the world that follow Jesus Christ in an Anglican way—was united around the saving work of Jesus Christ. What if the Anglican Communion were united around a common mission, which is ultimately Christ’s Great Commission “to make disciples of all nations” (Matt. 28:16-20)?  What if Anglicans came together to make disciples of all nations, “from everywhere to everywhere,”—baptizing them in the name of the Father, and of the Son and of the Holy Spirit, and teaching them to obey everything Christ has taught and commanded?  Imagine what that mission would look like as we joined hands to plant churches, send missionaries everywhere, heal the sick, cast out demons, do justice, love mercy and change our local communities in every dimension with the transforming love of Jesus Christ?

We are in a Kairos moment in the Anglican Communion: Will the Communion be faithful to God’s vision for his church, or will it succumb to the aggressive secularism of Western culture and the secularization of its Anglican provinces?

I believe it is time for the Global Anglican Future Conference (GAFCON) and all biblically faithful provinces, churches and leaders to put aside their differences and share their resources to overcome the deficits that prevent Anglicans from realizing God’s vision for his Church.

The Gospel Deficit and GAFCON

What I call “the Gospel deficit” is the crisis of false teaching in the Anglican Communion—principally in the increasingly secularized countries and cultures of North America and Europe. Over the years, the American Anglican Council has documented at length these departures from the Bible on essentials of the Christian faith, as well as departures from the Bible and the received teaching of the Church on gender, human sexuality and marriage.  The documentation of this false teaching is voluminous, and from many sources.[1]  A dear friend and brother in Christ, Bishop Alfred Olwa (Church of Uganda) recently addressed our Sunday morning class at my church on this very point, through the lens of Paul’s Epistle to the Galatians:

Within the Global Anglican Communion, the GAFCON movement continues to address this Gospel deficit. It stands boldly for the “one Gospel” to refute false teaching “which is in reality no gospel at all” (Gal. 1:7), and to fulfill Christ’s Great Commission by “preaching Christ faithfully to all nations” (the theme of GAFCON Jerusalem 2018). With exceptional boldness and specificity GAFCON has been challenging “false Gospels” and false teaching throughout the Anglican Communion, beginning in The Jerusalem Statement and Jerusalem Declaration (2008), in the GAFCON Nairobi 2013 Communiqueand the GAFCON Letter to the Churches, Jerusalem 2018.

In 2008, GAFCON called for the birth of the Anglican Church in North America (ACNA). The Preamble and Fundamental Declarations (Article I) of the ACNA’s Constitution were shaped by GAFCON’s Jerusalem Statement and Declaration. It was the General Secretary of GAFCON, Archbishop Peter Jensen, who, following the 2013 gathering, articulated a robust defense of the authority and clarity of the Scriptures. Under fierce opposition and marginalization from Anglican leaders, including the Archbishop of Canterbury himself, GAFCON has unrelentingly defended Lambeth Resolution I.10 (1998), which declares the Biblical teaching and received tradition of the church catholic on human sexuality, marriage and holy orders.  We give thanks and pray for GAFCON as it continues to address at the global level this Gospel deficit.

The Ecclesial Deficit and the Global South

But there is another deficit equally troubling. It is what some have called “The Ecclesial Deficit”—the shorthand way of saying that there is no final authority or decision-making body among the Churches of the Anglican Communion that can say “NO” to false teaching that leads people astray. This “ecclesial deficit” was defined formally in the Windsor Continuation Group Report (2008):

You may wonder why this is an equally troubling deficit. Why not proclaim Christ and the Gospel faithfully and not worry about false teaching?  Let the best one win and get on with mission.

The problem is that we have evidence from the New Testament itself that churches which are lukewarm, who tolerate false teaching and allow such teaching to lead people into sexual immorality, will not survive.  You can read about them in Revelation 2-3. Where are those churches today—Pergamum (Rev. 2:14-16), Thyatira (Rev. 2:20-25), Sardis (Rev. 3:1-4) and Laodicea (Rev. 3:14-18)? They and their mission have all but disappeared. The lesson seems to be that when churches tolerate false teaching, it leads to a weakening mission, accommodation, surrender to the surrounding culture and, ultimately, death.

This deficit is evident in the inability of existing Communion instruments to discern truth and error and take binding ecclesiastical action. The instruments have been found wanting in their ability to discipline those leaders who have abandoned the biblical and historic faith. To make matters worse, the instruments have failed to check the marginalisation of Anglicans in heterodox Provinces who are faithful, and in some cases have even sanctioned or deposed them. The instruments have also sent conflicting signals on issues of discipline which confuse the whole Body and weaken our confidence in them.

“… for my people have committed two evils: they have forsaken me, the fountain of living waters, and hewed out cisterns for themselves, broken cisterns that can hold no water.” (Jeremiah 2:13)

The instruments are therefore unable to sustain the common life and unity of the Anglican Churches worldwide, especially in an increasingly connected and globalising world, where different ideas and lifestyles are quickly disseminated through social media. This undermines the mission of the Church in today’s world.”  (paras. 26-29, emphasis added)

In response to this clear and present danger to the faith, order and mission of the Church, the Global South Anglicans meeting in Cairo resolved to address the ecclesial deficit with “enhanced ecclesial responsibility” to “strengthen our doctrinal teaching, our ecclesiastical ordering of our collective life as a global fellowship and the flourishing of our gifts in the one another-ness of our mission. The Global South Primates will therefore form a task force to recommend how these needs can be effectively addressed.” (Paras. 32-33)

This historic Global South encounter of Anglican Churches in the southern continents of the world has met six times since it began in 1994. Each time they have given structural embodiment to their South-South relationships. Whereas the advisory-to-the-Primates-only structures of GAFCON were just launched at Jerusalem 2018, the Global South Anglicans developed embryonic forms of conciliar and synodical structures- within the very structures of the Anglican Communion- from the very beginning. The Global South Anglican’s conciliar and embryonic decision-making structures are consistent with Lambeth Conference Resolution 18.4 (1988), which recommended the meeting of regional conferences that include representatives of clergy and laity as well as bishops. It is also significant that Resolution 18.4 (1988) had in mind a role for regional conferences in matters of authority and identity.

In other words, the then existing structures of the Anglican Communion opened the door for Global South Anglicans to be an important instrument for guarding the faith, order and mission of the Church. This is exactly what happened, for example, in the Global South Kuala Lumpur Statement (1997) that paved the way for the overwhelming reaffirmation of the Biblical and catholic teaching of the church on human sexuality, marriage and holy orders in Resolution I.10 at the 1998 Lambeth Conference.

The Way Forward: GAFCON and Global South Anglicans together

Often, leaders of the Global Anglican “status quo” accuse Biblically faithful Anglican leaders and Churches of being “schismatic” when they choose to say “NO” to and differentiate themselves from false teaching, and the structures that tolerate it.  Some even go so far as to say that such schism is worse than heresy. This accusation proceeds in part from the assumption of the “indefectibility of the Church”—the belief that the Church will right itself eventually if we just give it time.  The failure to be patient and “to have nothing to do” with false teachers and their teaching (see 2 Timothy 3:5) is deemed an act of “faithlessness” as bad or worse than the “slightly off-course-faith” of the false teachers and promoters of sexual immorality.

But let’s be clear that such accusations of “schism” are disingenuous. The “indefectibility of the Church” depends upon there being some authority within the Church that says “NO” to false teaching and disciplines those who engage in it so that it does not spread like a cancer, weakening the Gospel mission of the Church.  This authority at the Global level of the Communion is precisely what is missing!  Therefore, when Anglican leaders who know that there is no such authority in the Global Anglican Communion ask others to have faith and be patient, to engage in “good disagreement” and not to establish any Global or Regional Anglican structures that would guard the faith, order and mission of the Communion of Anglican Churches, they are being duplicitous.  Worse still if they are tolerating, blessing or even celebrating such false teaching.

Both GAFCON and Global South Anglicans have resisted any attempt to accept, or to dismiss as indifferent or as a theologically second-order concern any moral teaching or public practice in the Church that departs from the clarity and authority of Biblical teaching.  Both share the conviction that the very identity of the Church lies under the final authority of the Word of God.  To hold otherwise would be to subject the Communion of Anglican Churches to the instability of every wind of teaching and every scheme that is rooted in mere human sociology and management of conflict skills (see Ephesians 4:22)

GAFCON has been called by God, and has the gifts, to overcome the “Gospel deficit” by continuing to proclaim Christ faithfully to the nations.  Global South Anglicans faithful to Scripture and apostolic tradition have the calling and the gifts to establish fully conciliar and synodal structures that will say “NO” to false teaching, guarding the faith and order of the Church for the sake of Gospel mission.  Imagine what could happen if they put aside what differences they may have and joined together their calling and gifts for the sake of Gospel mission among the Communion of Anglican Churches!

[1] You can find a review of the crisis of false teaching in the Anglican Communion from 2002-2016 at Chapter 6, “Beyond the Breaking Point” in Anglican Conciliarism (Anglican House, 2016).

*The Rev. Canon Phil Ashey is President &  CEO of the American Anglican Council.