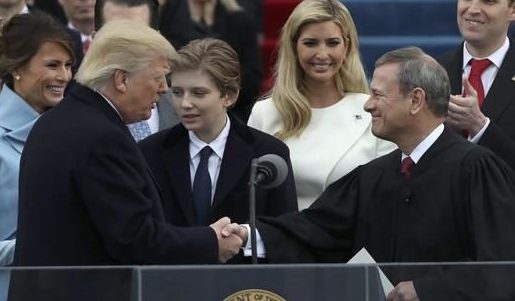 The following is taken from The American Anglican Council website, originally written by The Rev. Canon Phil Ashey:

A Prayer for the President of the United States

O Lord our Governor, whose glory is in all the world: We commend this nation to your merciful care, that, being guided by your Providence, we may dwell secure in your peace. Grant to the President of the United States, the Governor of this State, and to all in authority, wisdom and strength to know and to do your will. Fill them with the love of truth and righteousness, and make them ever mindful of their calling to serve this people in your fear; through Jesus Christ our Lord, who lives and reigns with you and the Holy Spirit, one God, world without end. Amen. (Book of Common Prayer 1979, p. 820)

I was distressed to read this week the decision of All Saints Episcopal Church in Pasadena, CA (TEC Diocese of Los Angeles) to suspend prayers for the President by name during Sunday morning worship.  Here is the reason they gave:

“Members of Pasadena’s All Saints Episcopal Church have removed the proper names from their prayers for “people in authority” because praying for President-Elect Donald Trump by name might cause trauma to some people, its Rector said.  “We are in a unique situation in my lifetime where we have a president elect whose name is literally a trauma trigger to some people – particularly women and people who, because of his words and actions, he represents an active danger to health and safety,” All Saints Church Rector Mike Kinman said in the church blog last week. “Whereas before we prayed for ‘Barack, our president,’ we are now praying for ‘our president, our president-elect, and all others in authority.’ This practice will continue for at least the near future,” Kinman wrote.”

You can read more about it here.

Even the Rector of All Saints Episcopal admits that he “doesn’t have enough data to make an informed decision” on this unprecedented omission from the Sunday morning prayers of the people. He is doing it out of “fear of traumatizing worshipers.”

There couldn’t be a more striking contrast between this Episcopal Church’s stand on the basis of emotion and the stand of Anglicans, as promoted by Bishop John Guernsey of the Anglican Diocese of the Mid-Atlantic to pray for ISIS terrorists by name. We were encouraged to pray by name for people who have committed acts of violence that traumatized people all over the world.

Frankly, this is one of those instances where God is making crystal clear the difference between a church that is driven by secular ideologies and feelings and a church that is driven by Biblical faith despite our feelings! I would simply say to church leaders who refuse to pray for the President by name “Do you want to be an ambassador of reconciliation in Christ’s name and heal the divide, or do you want to promote the divide by your actions and leadership?”

As Christians, and as Anglicans, we pray by faith in light of the truth of what God’s word commands us to do. And we do this despite our feelings. Many people were unhappy and even traumatized by the legal actions and executive orders of the Obama administration curtailing the freedom of conscience of Christians who refused to participate in same-sex weddings and were targeted by state and federal laws for litigation.

But we never stopped praying for “our President Barack” by name! Among Anglicans in North America, I am not aware that any church, at any time, refused to pray for our President by name—ever, despite intense disagreement with him.

As I pointed out in my Christmas day interview on CNN, “Faith is what we do with our fear.”  And the best way to express our faith in spite of any fears we may have is to pray.

It’s what the Bible tells us to do!  Paul wrote in 1 Timothy 2:1–4, “I urge, then, first of all, that petitions, prayers, intercession and thanksgiving be made for all people—for kings and all those in authority, that we may live peaceful and quiet lives in all godliness and holiness. This is good, and pleases God our Savior, who wants all people to be saved and to come to a knowledge of the truth.” The Israelites were certainly traumatized by the brutality and cruelty of the Babylonians who took them into exile.  But God told the Israelites in exile to pray for Babylon: “Seek the peace and prosperity of the city to which I have carried you into exile. Pray to the LORD for it, because if it prospers, you too will prosper” (Jeremiah 29:7). Romans 13:1 says, “Let everyone be subject to the governing authorities, for there is no authority except that which God has established. The authorities that exist have been established by God.”

You know the Bible makes special mention of praying for those in positions of authority. Such authorities include government officials (international, national, and local), representatives to our legislatures, mayors, city council, school boards, school principals and more…We should be praying for all of them by name if we can, including our President.

But praying for our leaders is not just a Biblical duty.  Praying for them makes practical sense. Our leaders can affect the conditions we live in and have an impact on our families, our churches, our workplaces, our cities, and our countries. When those in authority are obeying the will of God, it is easier to “live peaceful and quiet lives in all godliness and holiness” (1 Timothy 2:2). When evil men are in authority, our prayers for them are just as needed, as illustrated by William Tyndale’s last words as he was being burned at the stake: “Lord, open the King of England’s eyes.”

Also, we do not pray for our leaders merely for our own benefit. Leadership is a tiring task. Leaders carry a degree of responsibility to their followers. They are often the targets of criticism and the go-to people in a crisis. If they are leading well, they are living their lives in service as servant leaders.  So we pray that God will refresh them in mind, in body, in their thinking and in their spirit. We pray for them because we recognize the greatness of their task and because we are grateful for their willingness to lead.

So how should we pray for our leaders?

Can you imagine how worse our leaders would be if we did not pray?  So for God’s sake, and for all of our sakes, let us pray for our President Donald by name, and pray that he will do justice, love mercy and walk humbly with God (Micah 6:8).