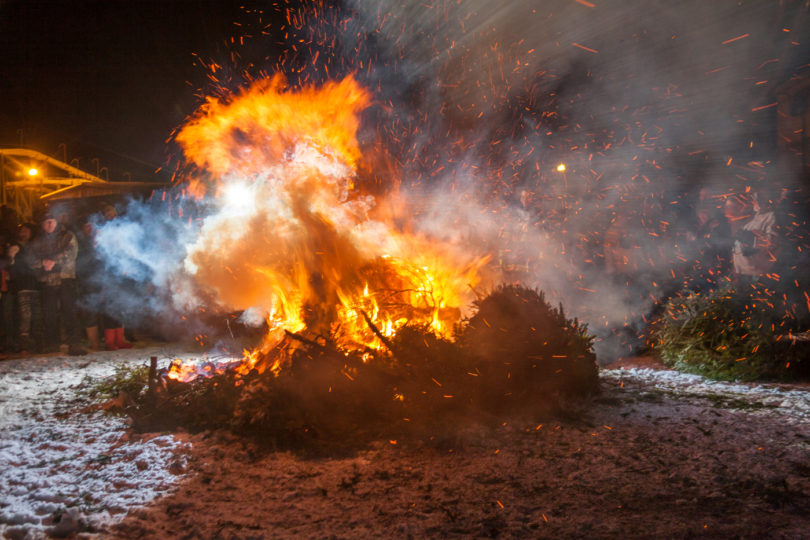 The following article was written by Chris Marchand and published on AnglicanPastor.com on December 18, 2019:

Anglicans often speak of the tradition of the 12 days of Christmas, emphasizing how the holiday is not merely one day but rather an extended season. The season spans from December 25 (or the evening of December 24) through January 5, and contains a number of nativity-oriented feast days along with separate saints’ days.

Many families and parishes already have their own set of devotional, liturgical, and celebratory practices as a way to enter the season of Christmastide.

But as a broader cultural tradition, the 12 days of Christmas has long fallen out of fashion and currently has little traction in people’s minds as a potential way of celebrating Christ’s birth. Many people even think the 12 days occur in the lead up to December 25, that is, from December 14 onward!

How, then, might we compel people in our communities—both the churched and unchurched alike—to adopt what is for them an entirely new way of doing Christmas (though it is actually quite old)?

The crucial task before us is to establish in people’s hearts and minds compelling enough traditions that they begin to yearn for them, year after year, to such an extent that their Christmases feel empty without them.

It only does so much to tell people that the 12 days is about entering into the story of Jesus’s birth as well as celebrating certain other saints’ days. Instead, our challenge will be to both tell of Christ’s coming while also giving people memorable activities to do.

One way to accomplish this is to firmly establish in people’s minds the two “tent posts” of the season, Christmas Day (Dec. 25) and Epiphany (Jan. 6).

It will be important to emphasize that the season not only opens with Christ’s birth but also culminates with the coming of the Magi on January 6, the Feast of the Epiphany.

Though the day would technically fall on the 13th day of Christmas and have us entering into the next season of Epiphanytide, the initial coming of the Son of God finds a powerful fulfillment with the journey of the Wise Men who came before Jesus, presented him with their gifts, worshipped him, and proclaimed him King.

It is on Epiphany where it is revealed that Jesus, the Anointed One, has come to be Savior for the whole world.

In the early church, January 6 came to be one of the more commonly held dates for Christ’s birth. It was originally paired with his baptism by John, as he “was about thirty years” old at the time, according to Luke 3:23. The same day also commemorated Jesus’s first miracle at the wedding in Cana and the feeding of the 5,000.

Calling it Theophany, Eastern Orthodox churches still celebrate Jesus’s baptism on January 6 rather than the coming of the Wise Men. Most Protestant churches, however, celebrate his baptism on the Sunday after Epiphany.

Somewhat confusingly, January 6 has also been called “old Christmas.” This is because from the 16th–18th centuries many European countries progressively changed from the older Julian calendar to the Gregorian calendar in order to fix the errors in our calculations of the earth’s orbit. When the calendar was finally adopted in England in 1752, many people protested it for years to come, as the old date of Christmas very literally fell on what had then become January 6.

Many kinds of celebrations have been associated with Twelfth Night (January 5) and Epiphany, but the ones that will take the deepest root in our communities are the traditions we are able to innovatively adapt to a modern context.

My proposal is that we create a grand Epiphany festival that has the potential to become a community-wide event. While this idea can certainly be scaled down for the home, similar to a large birthday party, a festival will work best in a church or school setting.

The Epiphany festival can occur over the course of one evening or an evening and the following day. Two obvious examples for a two-day event would be January 5 and 6, or the Saturday evening and Sunday morning closest to the feast, when the church gathers for worship anyway.

The festival will include four potential main events, which will have to be adapted to the context of individual communities:

Since this is a relatively major event to plan for, it will be important to intentionally make your Christmas Eve or Day gatherings more low-maintenance and about worship, singing, and reading the Scriptures together. This is so that you do not burn yourselves out during the season.

If an Epiphany festival catches on, people will begin to see Christmas Day as more worship-oriented where we then retreat to our homes to be with family, and Epiphany as the time for more jubilant public celebration.

Beginning with the carnival, people can come and play any manner of large communal games, traditional Twelfth Night games, board games, or rented carnival games and inflatables.

It is also customary to bake an Epiphany or Three Kings cake inside of which is hidden a small object. The objects are typically a bean, coins, figurines of the gifts given to Jesus, or figurines of the Wise Men themselves. Whoever finds the bean then becomes the king or queen of Epiphany.

For your festival, you would need to choose if you will have one king or queen, both a king and a queen, or some other variation and quantity. From there you can decide what privileges the newly christened monarchs have, which could entail sitting on a throne, the privilege of giving commands to others (which could become problematic), receiving a prize, or being given the honor of passing out gifts to the children at the festival.

Alternatively, many cultures have their primary gift exchanges on Epiphany. Often it is the Wise Men who are the gift-bringers, which means you could have three people dressed as the magi (going with the traditional number) who travel around the festival giving out small gift bags to children.

If you hold your festival all in one night, you could then transition into worship with the prescribed Epiphany liturgy and accompanying Scripture readings. A few of the Epiphany-themed carols and hymns you can sing are “We Three Kings,” “What Child is This?,” “The First Noel,” “Hail to the Lord’s Anointed,” and “When Christ’s Appearing Was Made Known.”

One component of your festival that will be distinctive in your community (if you choose to perform one) is to hold off having any kind of Nativity play until Epiphany. You could even choose to call it a Christmas and Epiphany play when you promote it. As a church that follows the 12 days of Christmas, it will be important to paint a larger picture for people, emphasizing how Christ’s birth and the journey and visit of the Wise Men were a series of events that took time to unfold.

Much like Palm Sunday and Holy Week spread out the story of Christ’s passion in the leadup to his resurrection, celebrating the different feast days of Christmas creates an immersive experience for people. Whether your events are child-focused, teaching-focused, celebratory, worshipful, or a combination of them all, by meeting together on the other feast days you can give people the opportunity to go on a pilgrimage of sorts with the Holy Family during Jesus’s infancy.

One final way to offer this kind of experience to people is to develop a Stations of the Nativity, which parallels the Stations of the Cross, and for which there are a number of resources available that include readings, prayers, and appropriate Scripture passages. Art for this could be commissioned from a local artist and set up in an appropriate place in your building.

Moving back to the Epiphany festival, the night can conclude with a natural Christmas tree bonfire. Possible locations are the church or school premises with your town’s approval, or out in the country on someone’s property that is large enough for a fire. There are many Christmas, New Years, and Epiphany traditions across cultures that prominently feature elaborate light displays or people processioning around their towns carrying various forms of lights and fires.

Though these kinds of traditions are ancient, Christians have come to associate them with Jesus, the Light of the World, becoming flesh and dwelling among us. For families who choose to intentionally take down their Christmas decorations at Epiphany (a practice you might want to encourage community-wide), a bonfire provides a communal opportunity for people to bring their Christmas trees to one place and boldly light up the night together!

Inviting people to the feast

While there are certainly other traditions associated with Epiphany—such as house blessings and marking our doorways—creating a concentrated event like the one described above will hopefully find people in your community saying “Hey, we’re going to do that festival again aren’t we? I mean, it wouldn’t be Christmas if we don’t end it the right way!”

The intention behind a festival is to attempt to strike a balance in the types of traditions we are introducing to people by creatively combining celebratory parties with our prayer and worship. Next, we will need to be mindful of the time we require of people, choosing to hold the festival either over a single evening or as a manageable two-day event.

It will be a challenge to shift our culture’s timeline and paradigm of Christmas. However, if we can infuse our holidays with both the joy and reverence of Christ’s coming as well as a whole lot of celebratory fun, perhaps more and more people will want to join us on our yearly journey to come and worship Jesus, the true King and Light of the World.

Note: This article was adapted from sections of Chris’ book, Celebrating the 12 Days of Christmas: a Guide for Churches and Families. Featured image: Bonfire On The Beach, by Paul VanDerWerf via Flickr.

Chris Marchand is the author of Celebrating the 12 Days of Christmas: a guide for churches and families, out October 2019 through Wipf and Stock. He is a transitional deacon in the Diocese of Quincy and serves at Epiphany Church in Peoria, Illinois as Pastor of Worship and Music. He and his wife Elisa have three boys and a girl. Chris is always up for a discussion about music, film, literature, or art of any kind.