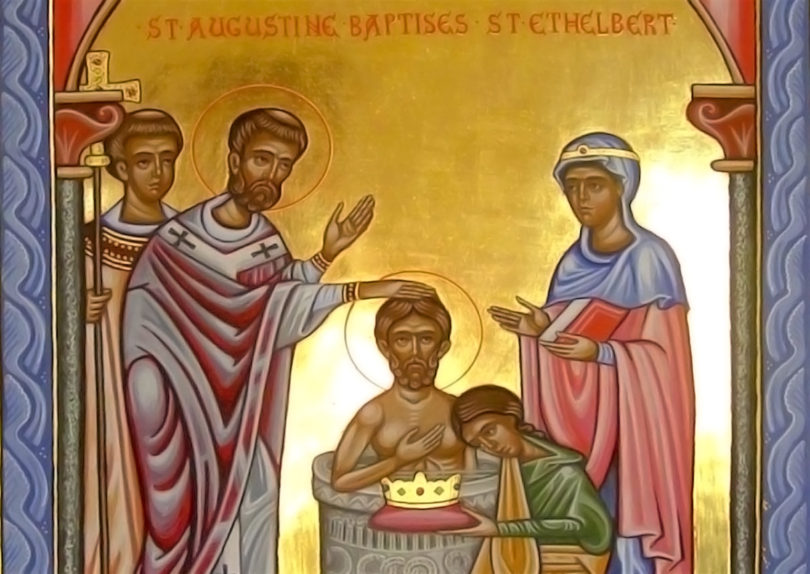 The following post is taken from AnglicanPastor.com, originally written by Greg Goebel and published on July 21, 2016:

There is a perception that Anglicans in North America don’t have our own history of evangelism. Or at least, not one that comes from within our own tradition. Not true! The church in England began by a powerful evangelistic mission that followed Jesus’ commands in Luke’s Gospel. So the Anglican tradition has within itself a powerful story of evangelism and mission that we can follow today in North America.

When Jesus sent out the 72 as witnesses, he gave them a roadmap for their evangelism:

In A.D. 596, St. Gregory the Great, Bishop of Rome, and St. Augustine of Canterbury took this roadmap seriously. As told by the Venerable Bede in the Ecclesiastical History of the English People, St. Gregory sent Augustine and a team to Britain.

Proclaiming the Kingdom of God and Speaking Peace

Upon arrival they told King Ethelbert that they “had come from Rome with a joyful message which assured those that listened to it everlasting joys in heaven, and a kingdom that would never end with the living and true God”  (This king’s wife was a Christian already, so he had heard some already.).

When the king invited them to talk, “they came with divine, not magic power, carrying a silver cross for their banner, and the image of our Lord and Savior painted on a board. Chanting litanies, they offered up their prayers to the Lord for eternal salvation – both their own and of those to whom they had come. In obedience to the King’s command, they sat down and preached to him and his attendants the word of life.”

In this way they proclaimed the Kingdom of God, and also spoke peace to the king and the people.  He wasn’t ready to convert, yet they didn’t attack him or take it personally.

Living Among the People and Eating and Drinking

Their message and their peace prompted the king to say, “Since you have come a long way and are strangers in my kingdom, apparently wishing to impart to us what you believe to be true and beneficial, we do not want to harm you. We will be hospitable and make sure you have every necessity. You may preach and convert as many people as you can.” And then in a move that changed Anglican history, “the King gave them accommodation in the city of Canterbury, the capital of all his dominions, and did all he had said. ”

Bede continues: “They prayed and fasted constantly and preached the Word of life to as many as they could. They despised all worldly things and received nothing from those they taught except the food they needed.”

People responded. “Some people, impressed by their blameless simplicity of life, and the sweetness of their heavenly doctrine, believed and were baptized.”

Let God be the Judge: Its Not About Our Righteousness

Bede says that “as they approached the city, with the holy cross and the image of our sovereign Lord and King, Jesus Christ, they sang this litany: We beseech thee, O Lord, for Thy great mercy, that Thy wrath and anger be turned away from this city, and from Thy holy house, for we have sinned. Hallelujah.“

They didn’t blame “those pagans,” but they confessed “we have sinned,” another move of peacemaking. They identified with the people as fellow fallen human beings. They saw it as showing people what Jesus and the Gospel does to transform us and bring peace. They recognized God’s authority, rather than asserting their own power. They pointed people to his mercy, rather than withholding that word of grace.

The king’s conversion is worth a longer quote: “Eventually the King believed and was baptized, attracted like others by the pure life of these holy men and their gracious promises which they confirmed by many miracles. More people every day flocked to hear the Word and have fellowship in the unity of Christ’s Holy Church, forsaking their pagan rites. It is said that, while he rejoiced at their conversion and their faith, the King never forced anyone to embrace Christianity, – he just showed more favor to the believers, as to his fellow citizens in the Kingdom of Heaven. For he had learned from those who had instructed him and guided him to salvation, that the service of Christ ought to be voluntary, not by compulsion. Before long he gave these teachers a permanent residence suitable to their status in Canterbury.”

The “many miracles” show them healing the sick – being a healing presence among the people. And the king recognized that no one can be coerced into the Faith of Christ. This is so relevant for today.

There are many other stories of evangelism in Anglican history: George Whitfield, the Wesley brothers, and many more. But this foundational one gives us a great roadmap.

Evangelism really can’t be done any other way. It is incarnational, personal, and takes time. It involves eating, drinking, listening, praying, rejoicing and mourning with people. It has to be done in peace, with no coercion or trickery. It has to be proclaiming the Kingdom of God – not hiding it or obscuring it. It can’t be a personality program – it must be about the Gospel and not our own agendas. We need to bring healing, and we need to let God be the judge. And it is visible. Church buildings, worship, prayer meetings, websites, books – all are a part of demonstrating that the kingdom of God has come near.

Human nature hasn’t changed since Jesus sent out the 72 or since St. Gregory sent Augustine’s missionary team 1400 years ago. So lets follow the Anglican way of evangelism and re-evangelize North America together.