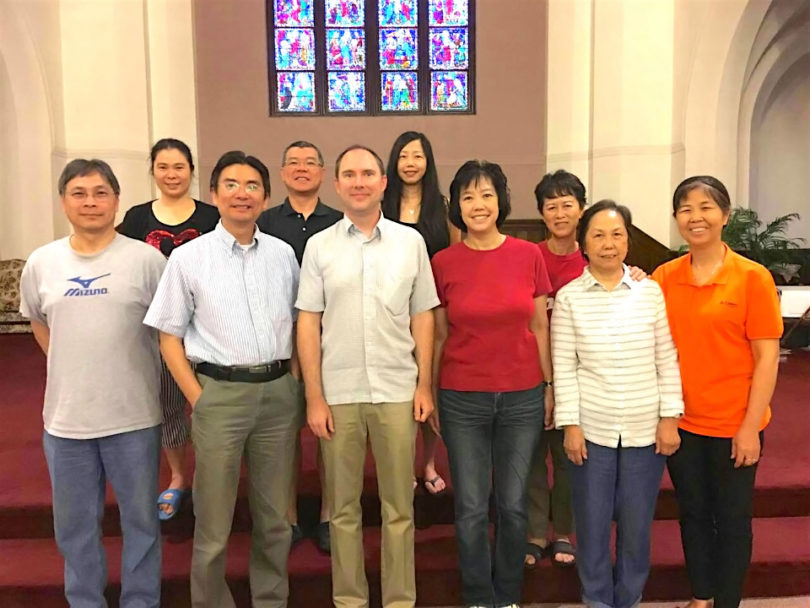 The following is taken and adapted from The Rev. Evan Pillsbury’s post entitled, Gathering the Hot Coals, and well explains new developments in partnership between our diocese and The Center for Chinese Initiatives, as well as the new partnership between our Christ the King and Light of Christ congregations. We are thankful for his thoughtful write-up and contribution.

In my early days on Campus Staff with InterVarsity I was involved in a learning cohort for planting new campus fellowships.  Our trainer and Divisional Director, Chris Nichols, said, “if you want to start a fire, you need to keep the hot coals together.”  Those of you who burn wood as a heating source for your home know how much simpler it is to get a blaze going once you’ve got a couple hot coals.  Almost magically, whatever rubs up close will easily start to combust.  Much like InterVarsity Christian Fellowship, our prayer with Light of Christ, Greater Portland, is that we would be a part of igniting a Kingdom movement for Jesus that would renew and revive the fires of the Gospel in our time and place.  In God’s timing some of those ‘hot coals’ are coming together to ignite mission and ministry in Greater Portland.

An amazing Chinese dinner with new friends from the Golden Lampstand.

This summer, Light of Christ has been growing in partnership with a Chinese mission society called The Golden Lampstand.  Like Light of Christ, the heart of the Golden Lampstand is to see the fires of Gospel renewal reach the church of New England.  As the church in China has been growing, they have not forgotten the sacrifice of New England missionaries who brought the Gospel to China in the 19th and early 20th century.  In obedience to this vision for revival, the Golden Lampstand this winter acquired a former Roman Catholic church in Biddeford, Maine, which they are repairing to use as a ministry resource center for evangelism and marketplace ministry.

The society’s local contact is Dr. Abraham Chan, an ordained Lutheran minister currently in the discernment process for Anglican Orders with the ADNE. Dr. Chan’s work with the Golden Lampstand is part of a new project called the Center for Chinese Initiatives (CCI).  CCI is an emerging ministry supported by The Anglican Diocese in New England and partners with Gordon Conwell Seminary and others, as they seek to build reciprocal ministry between the Church in North America and China.

This August, Dr. Chan invited me to speak on evangelism in New England at a retreat for the Golden Lampstand.   The following day a crew of some 30 Chinese missionaries visited a Sunday service at Light of Christ.    Our preacher, Fr. Jean Ngabo Segasinde, had his sermon translated into Mandarin!  Through the amazing hospitality of a local family, my family and the Chinese missionaries all met at a beautiful family farm for an evening of delicious Chinese food and fellowship.  By bringing our ‘hot coals’ together with the Golden Lampstand, CCI is helping to spark a beautiful new Gospel partnership. 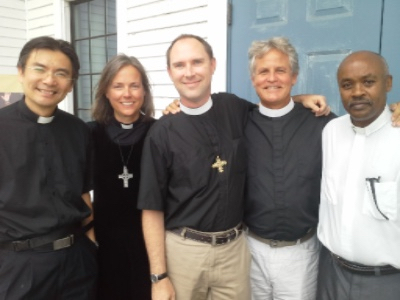 In addition to this new development, in late Spring of this year, Light of Christ began sharing worship and celebration with our sister mission, Christ the King Anglican Mission, Biddeford. Only about 20 minutes to our south, Christ the King is lead by Mother Cinnamon Creeden.  She suggested that a great way to ‘begin an adventure’ with our two communities would be to share a 24 Hour Prayer Vigil. From May 27 to May 28th, we prayed from 9AM to 9AM at our worship site in Portland, taking 1-2 hour prayer slots round the clock.  Our theme was “Kingdom Breakthrough,” which the Lord met with power.  We saw a breakthrough in church unity with participants from seven churches and missions from across the Body of Christ totaling nearly 30 persons.  We saw a breakthrough for seekers and skeptics who attended a healing prayer session that we opened to the community.  Each person receiving prayer ministry was met by God in a unique, refreshing way.  Other vigil participants who entered feeling spiritually dry found God surprised them and released a new joy in prayer.

A favorite comment I heard was, “When you asked me to give an hour of prayer, I thought I was the one making the gift.  But as my prayer hour continued I realized that I was the one receiving the gift.”  Also one participant, who had been on the edge of ministry, felt the Lord moving in them to finally ask for baptism.  Their time alone with God had become a tipping point.  By creating a ‘boiler room’ of prayer, gathering the ‘hot coals’ in one location, God released a breakthrough for Greater Portland. Our adventures with Christ the King continue this Fall as we continue to join together for worship and spark one another for God’s Kingdom mission.