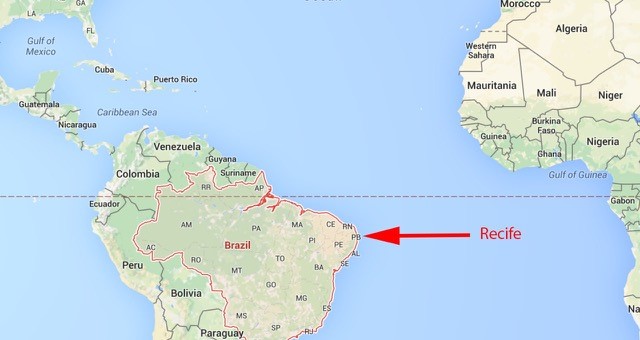 This update on the Diocese of Recife, Brazil (a conservative diocese which split from the Episcopal Church of Brazil and is now aligned with GAFCON) was written by The Rt. Rev. Bill Atwood, Bishop of the ACNA International Diocese, and published on the American Anglican Council website:

I have just been in Recife, Brazil, on the eastern tip of South America. Most people in the US think of South America as being directly under North America, but as you can see from this map, it actually is far to the East, and little of it is directly under the States. Recife is actually closer to Africa than Dallas is to Philadelphia. Recife has a rich Dutch, Jewish, and Portuguese history going back to its founding on March 12, 1537. Since then, it has been under a number of powers:

During this time, Recife saw the first Jewish Synagogue in the Americas. They also welcomed those who would go on to New York and establish New Amsterdam, eventually, New York City. 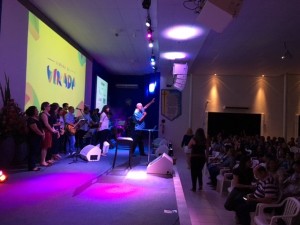 The occasion of my visit these last few days was their Diocesan Synod, an ordination, and their week long extravaganza of worship, teaching, and fellowship: Semana da VIRADA (Virada is Portuguese for “turn.” It is seven days of teaching and music designed to help people turn to Christ and/or turn to more faithful ways of walking with him.).

On Thursday night we went to the Virada gathering. The auditorium at the Anglican Parish of Espiritu Santo (Holy Spirit) was packed with more than 750 people. It was notable that more than 80% of the music was original worship music indigenous to Brazil. While most areas have some original music, Brazil is notable in that there is a prolific production of things being written and produced there. It was obvious observing the people that they know and love their worship music. Many of the songs were compelling, ranging from sweet to powerful. Also notable was the presence of a vast number of young people. There were still a few gray heads in the room but most were young singles and young families. 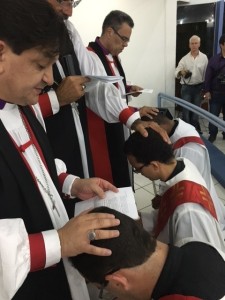 Teaching and a call to ministry was done by Pastor Carlito Paes. On Friday, I preached at the Eucharist that opened the Synod and participated in the Ordination, laying hands on one of the four Deacons. They also ordained three priests and licensed a number of lay ministers. This was the first Synod meeting since the Diocese of Recife had lost four of their buildings to the Episcopal Church (of Brazil), including their Cathedral. I preached on the following passage from Mark:

Mark 10:29-31 So Jesus answered and said, “Assuredly, I say to you, there is no one who has left house or brothers or sisters or father or mother or wife or children or lands, for My sake and the gospel’s, who shall not receive a hundredfold now in this time—houses and brothers and sisters and mothers and children and lands, with persecutions—and in the age to come, eternal life. But many who are first will be last, and the last first.”

It was easy to see how deeply these people have invested in the Gospel of the Kingdom and are utterly undeterred by the loss of a few buildings. As they said, “We have the Church if not the building.”

The longstanding strategy of the Diocese of Recife, going back to Bishop Robinson Cavalcanti, is to engage the community with the Gospel in a variety of ways. They operate amazing programs of Day Care and after school care. They operate a thrift shop, have countless outreaches into the community by their many cell groups. One of my favorite places is Casa da Esperança (House of Hope). There they take in children of working single mothers or other at risk kids and love them to wholeness and academic excellence. 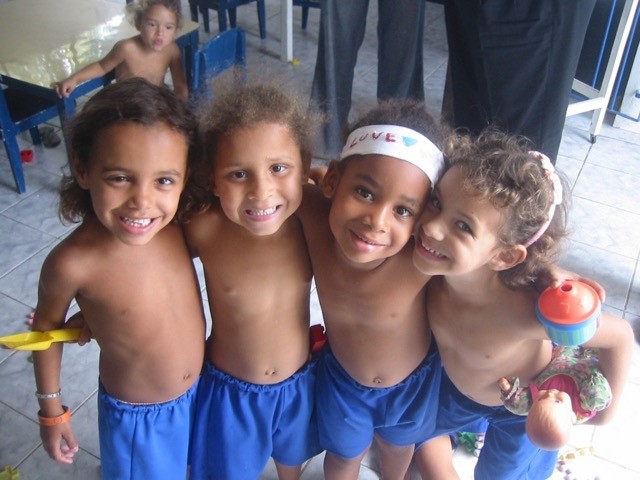 The Biblical stand of Bishop Cavalcanti and the people caused them to be thrown out of the Episcopal Church of Brazil (Igreja Episcopal Anglicana do Brasil, IEAB), which continues to wholeheartedly pursue the liberal agenda; a practice they continue as they shrink and will likely die. In stark contrast is an orthodox, GAFCON-aligned Diocese that, since they were thrown out of the Episcopal Church in Brazil, has doubled in pretty much every possible metric. Lacking a Provincial affiliation after being booted from IEAB, the Diocese is under the oversight of the GAFCON Primates Council. I was there for another visit as the GAFCON Ambassador to discuss the need for orthodox parishes in other parts of northern South America to establish links across the Communion.

The current Bishop of Recife, Miguel Uchoa, planted and now leads the largest Anglican parish in Latin America as well as the Diocese. He was elected bishop when Bishop Cavalcanti was murdered by an adopted son, who was on drugs. Bishop Miguel and the diocese continue to help bring people to faith in Jesus Christ, disciple them, and deploy them into what I think might well be the most full Gospel expression of any Anglican Diocese in the world. Of course I haven’t been to every diocese in the Anglican Communion, but I have been to many, many dioceses in 37 of the 39 Provinces.