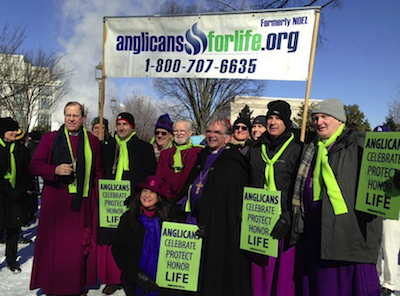 Bone-chilling cold and snow wreaked havoc on the travel plans for many of our Anglican bishops, but we still had a contingent of fifteen ACNA Bishops at the March for Life that marked the 41st anniversary of legalized abortion in this nation. Sally and I were personally stuck in Detroit as our connection to Washington was canceled, but we were able to catch a flight the morning of the March that got us there just in time. Thank you to all of you who prayed for us.

The unity of the Body of Christ was on display as Anglicans stood shoulder-to-shoulder with Roman Catholics and many other Protestants in the public square to give witness to the Gospel issue of the Pro-Life Movement. It was so incredibly moving to see so many young people, ranging from those too young to vote to those not yet graduated from college, in fellowship for the unborn, chanting their love of babies and calling themselves “The Pro-Life Generation.”

All life is precious to God as he alone determines the beginnings and we should not be the ones to determine the end.

Transitions and successions in important offices are matters for history. In the life of a new church, the passing of the baton from the founding rector to the new rector is very important and a sign of the health of the church. On the Second Sunday after the Epiphany, I visited with Anglican Church of the Redeemer in Franklin, Massachusetts.

Under the leadership of the founding rector The Rev. Jack Potter, Redeemer Franklin has completed the handing off of that position to Fr. Dan Sylvia who was instituted on January 19. Additionally, Fr. Brian Morelli was named associate priest and Jeff Newman as Lay Pastor of Ministry. And to ensure that they would hold the record for how much could get done on a Sunday morning, I performed five confirmations, one reception and the blessing of an altar and baptismal font!

You can see some pictures from this joyous Sunday on our Facebook page.

The diversity of our diocese is truly a blessing. We are currently growing mission communities that are Kenyan, Ugandan, Hispanic and Chinese, and I visited with one of them this past Sunday in Malden, Massachusetts. St. Luke’s held a great celebration at their small mission that is part of our Kenyan Archdeaconry. It brought together The Venerable Peter Gachathi, two lay pastors, and a Kenyan priest who is transferring to our diocese, Rev. Francis Gikonyo.

Please pray for the St. Luke’s Bishop’s Committee as they discern with me the call of their vicar.