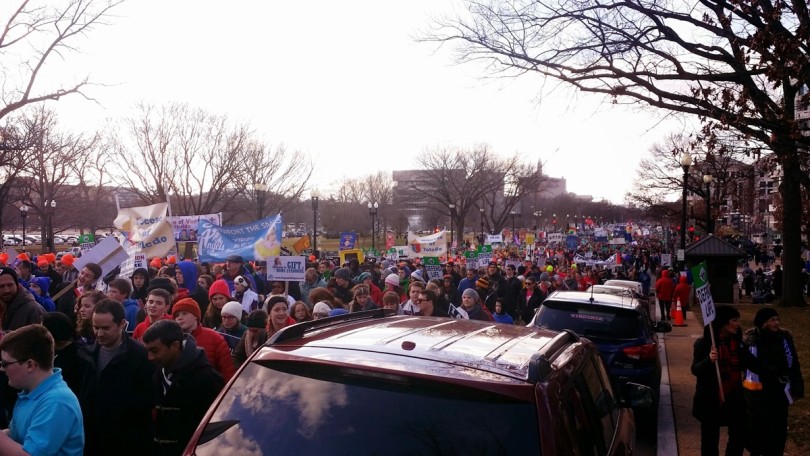 On Thursday, I marched in my second March for Life in Washington. The March provides an opportunity to be refreshed and renewed for a fight that more closely resembles a marathon than a sprint. Seeing the commitment of others, hearing the stories of healing, and witnessing the unity in such diversity all feed the soul and grow the resolve to bring an end to abortion.

As I imagine is the case for many who have been there in recent years, the most striking takeaway is the number of young people. The great majority of marchers were teenagers, and among them, teenage women. At face value, this shows me two things:

But the more I have thought about this phenomenon of teenagers at the March in such great numbers, the more I viewed it as a challenge rather than a clear cut reason for celebration. While the high school demographic was well represented, the college and twenty-something not nearly as much.

Granted, recent college graduates likely have full time jobs and even families keeping them from the March, but I don’t think this gives all twenty-somethings a pass. Somewhere between the homecoming football game and their bachelor’s degree, these young men and women are led astray. I could go into how this happens, but we all know those influences.

The onus is on all of us to be mentors for today’s teenagers to keep them on track. This mentoring starts when they are close–under our roofs, in our classrooms, at our churches–but must continue when the distances increase and the outside influences grow ever present. Maintain the mentoring through regular communication (read phone calls and letter, not just emails!), regular prayer, and constant encouragement as they face a culture and peers that are hostile to life and very good at deception.

In some ways I guess it’s a relay race more than a marathon as we pass the baton from generation to generation. What I saw on Thursday was a healthy movement with unity and clarity. But marching alone is not going to bring about the change we need; the change that the babies, mothers, fathers, seniors, developmentally challenged, physically handicapped all need us to create in our nation.

As Anglicans who stand for the sanctity of life and who marched by the halls of power on Thursday, let’s pledge to take the next step. We need to bring the messages, passion, and unity displayed at the March into our local pews and small groups. We must continue to engage the youth, and plan to bring them next year. And we need to take the rhetoric and talking points of old, and replace them with an overwhelming display of compassion for ALL of the victims of abortion.

Ryan Boehm is the communications director for the Anglican Diocese in New England and attends Christ the Redeemer Anglican Church in Danvers, Massachusetts.