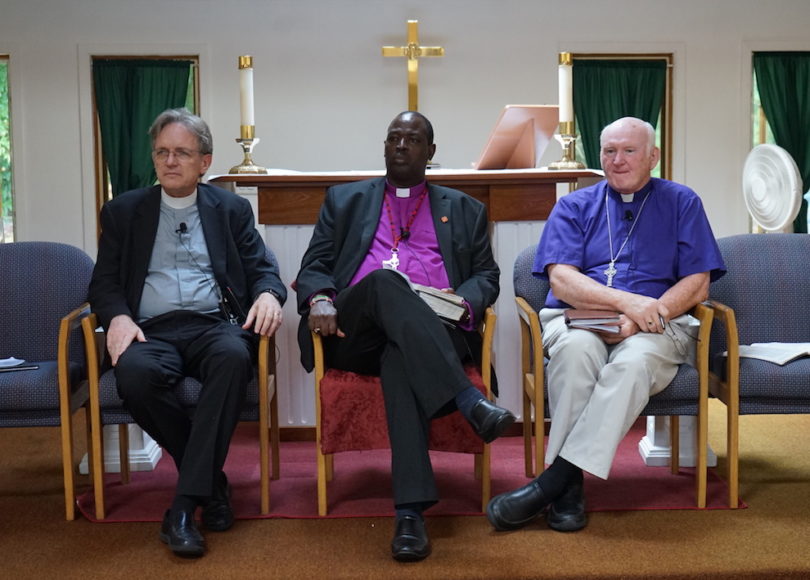 Listen to highlights from Archbishop Jackson’s opening address above

“We are asking ourselves, how can the Church find her way into the center of public space?” Archbishop Jackson explained during a Panel discussion at Grace Anglican Church in Bridgewater. The second day of the East African conference brought together Sudanese, Kenyan, and Ugandan ministers from around New England to hear the Kenyan Archbishop give his opening address and engage them in conversation about the state of the church in Kenya and here in New England. He was joined on the panel by Bishop Bill Murdoch and the Rev. Canon William Beasley of the ACNA’s Greenhouse movement and GAFCON’s Global Mission Partners Network.

Bishop Bill spoke on the issues facing the American church, despite ethnic backgrounds, and how it affects the next generation of East African Christians as the culture pulls the church into marginalization. Abp. Jackson’s desire to bring the Church of Kenya into the center of Kenya’s social commentary mirrors a desire that Bishop Bill has to see the trend reversed here in the United States. He spoke on the importance of East African and American ministers praying and working together to bring the Christian voice to a new generation.

Canon William Beasley explained the condition of the church in the Chicago area amid a crisis in the city’s culture, ripped apart as it is by violence and racial division. “There are churches side by side on every corner, and what difference is it making?” he asked passionately in an appeal to stop putting up divisions between churches and come together to bring change. It is beginning to happen in his home city. Through the Greenhouse Movement’s mission initiative, Canon Beasley has seen African-American, African, Hispanic, and Caucasian churches coming together in the name of Christ to plant small seeds which “have the power of the Kingdom of God to change the conversation” in their communities.

Find out more about The Rev. Canon William Beasley and his work with The Greenhouse Movement of the Anglican Church in North America.