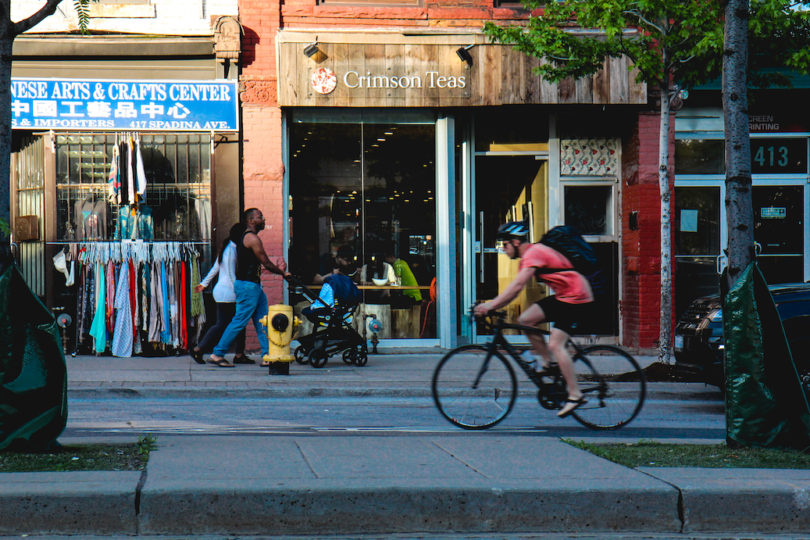 The following was written by Scott Hunt, Communications Director for the Anglican Network in Canada, originally published on the ACNA website.

Crimson Teas is a small teashop in downtown Toronto, nestled along the very busy Chinatown stretch of Spadina Avenue. They boast the “Best Pu-erh Tea in Town” and serve green tea noodles, dim sum, and desserts among other things. Inside, one wall is painted bright crimson red and large sketches of unnamed faces hang there. Tree trunk stools surround a long, angular wood table which runs the length of the narrow room. And if you just happened upon this unique, little establishment it might not be where you’d expect to find an Anglican church. But it is where you’d find Christ the King, Toronto (CTK) — a growing, Bible-based, Christ-centered, multicultural parish in the Anglican Network in Canada (ANiC).

“We had to get a few ducks in a row,” Sandra Guinness, member of the church council, said when asked about finding a place to meet in the busy and expensive downtown Toronto. “The challenge of both finding a suitable location and the financial cost of renting—let alone buying— a place downtown was daunting.”

Christ the King launched as a church plant in 2009 under the name “Toronto Centre Project” and met in a leader’s living room. In 2010, they began meeting in the afternoons at a local Baptist church and chose the name Christ the King Anglican Church. In 2016, they joined with another ANiC church plant in the city, Christ the Redeemer, to experiment with holding some services together.  In early 2017 the two congregations officially merged with the Rev. Keith Ganzer as rector.

“Back in 2016, we were a very small church with about 20 members coming each Sunday,” Ganzer said. “We felt it was important to move to a location closer to downtown Toronto and the university context.”

Then, God opened a door through a small business owner named Phillip Chan. Passionate about the benefits of tea, Chan opened Crimson Teas in Chinatown and happily opened his doors to CTK for their Sunday services free of charge.

By God’s grace, Chan’s generosity gifted the small congregation with a wealth of opportunities.

With access to a commercial kitchen, food quickly became a big part of life at CTK. Before services, you can get a cup of milk tea (Hong Kong-style, minus the sugar) and homemade muffins. Afterwards, the congregation has lunch together every Sunday.

“Phillip graciously prepares lunch for us each week, and the food is just great every time – tasty and nutritious!” said Jerry Gu, who joined the church in 2017.

As well as the financial freedom and fellowship opportunities, the teashop has made CTK more known in the city and visible to the neighbourhood. On Sundays, anyone walking the busy, downtown street can see their service through the floor-to-ceiling teashop windows. Chan makes a point to invite his customers through the week and some have begun attending on Sundays.

“The number of times — since we started meeting in Crimson Teas — where there have been no visitors on a Sunday can be counted with the fingers on one hand,” said Ron Bales, the church treasurer.

The large windows have also blessed the congregation while they worship. Roger Ong, the assistant minister explained: “The snow falling, people walking by, the street car, curious onlookers, a homeless man and once the Chinatown Festival float parade! It is a great reminder that the church exists for the world and that we are called to be on mission.”

Positioned now in Chinatown and near universities with many international students, CTK has a beautiful variety of people, young and old, worshiping and fellowshipping together. With some space limitations at the teashop they are looking at adding a third Sunday service, finding more room for a children’s program, and prayerfully considering the possibility of a new church plant in the future.

Of course, being such a diverse congregation isn’t without its challenges. “Where messiness increases, His grace abounds all the more,” Ong answered. “God could have chosen to stick with one people… But He didn’t. Making disciples of all nations? That sounds a whole lot more messy and less efficient. But when it all comes together – what a thing of beauty to behold!”

In a world getting smaller and more interconnected every day, more and more churches face the challenges and wonderful opportunities of drawing together people from all backgrounds and cultures. And as society continues to shift and change, our models for church planting, buildings, and growth may need to find new shapes and strategies as well. In some cases, it may look like meeting in a teashop on a busy street in Chinatown.

“One of the things we have been sharing,” said Bales, “with some of our visitors who were keen to church plant is, ‘Don’t pray for a church building; pray for a Phillip Chan!’”