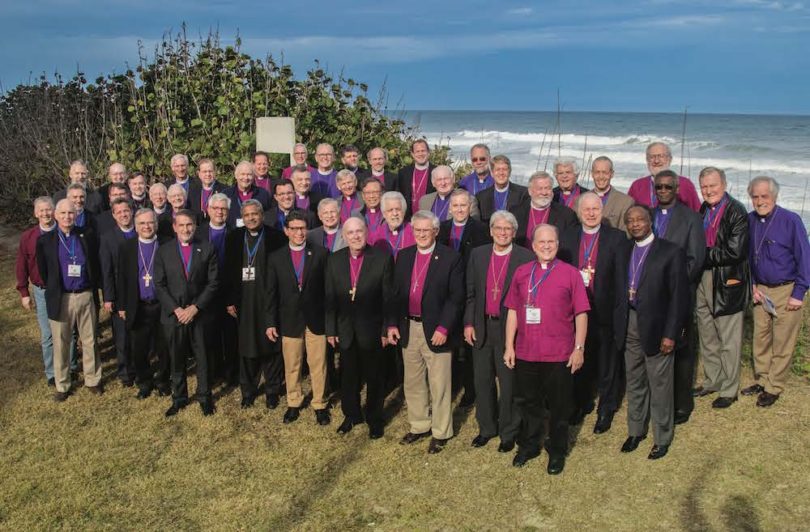 “‘For the mountains may depart and the hills be removed, but my steadfast love shall not depart from you, and my covenant of peace shall not be removed,’ says the LORD, who has compassion on you.” (Isaiah 54:10)

As Bishops of the Anglican Church in North America, we met as a College in Melbourne, Florida fromJanuary 8th to 12th to pray together, learn, and take counsel with one another under the direction of the Holy Spirit. In the context of challenges and disasters in the world, we have taken heart from God’s promise of steadfast love. Once again, we have experienced the bonds of peace, seeking God’s solutions for the Church and for the world around us.

During our meeting we learned of the death of the Rt. Rev. Charles H. (Chuck) Murphy, III. We gave thanks to God for his life and prayed for his family. The College also requested the Archbishop to communicate our condolences and prayers to Margaret and the rest of his family.

Together with our spouses we shared in times of teaching and small group discussion on the topics of racism, cultural engagement, and the persecuted church.

Racism – We were challenged and encouraged by a presentation from Albert Thompson on the history of racism, particularly in American Anglicanism. Professor Thompson, a historian and member of the Standing Committee of the Diocese of the Mid-Atlantic, recounted the painful story of the church’s participation in racism and invited us into the biblical experience of lament with those who have suffered injustice. We urge our churches to join us in lamenting the sin of racism that plagues our nations, that the Lord may touch our hearts and spur us on, bringing forth in our communities the fruit of peace, justice, and reconciliation.

Engaging the Culture – Bishop Todd Hunter taught on the Kingdom of God in contemporary culture, challenging us to seek the loving heart of Christ for the world.  He emphasized that an effective evangelist is fully differentiated from worldly values, but yet is authentically connected, engaged with the world for the sake of the Kingdom of God.

The Persecuted Church – We were thankful for the presence and testimony of The Most Rev. Humphrey Peters, the Moderator Bishop of the Church of Pakistan.  Christianity has roots in Pakistan going back to St. Thomas the Apostle.  Bishop Peters shared how the Church is sharing God’s love in their local communities through clinics and education.  Bishop Peters reminded us that the blood of the martyrs is the seed of the Church, and despite suicide attacks carried out by Islamic terrorists against some of his congregations, the Church remains vibrant and courageous.  We gave thanks for the perseverance of the saints in Pakistan, and we shared in a time of prayer for the persecuted church.

Prayer Book – We took important steps toward adopting final texts for Holy Communion and the Daily Office in preparation for the Book of Common Prayer 2019. After more than four years of using the “working texts” of these rites, and revisions based on extensive feedback from the Church, the bishops unanimously adopted two Eucharistic rites and the orders for Daily Morning and Evening Prayer. The proposed final forms of Collects of the Christian Year, the Daily Office Lectionary, and Supplemental Canticles were also approved. Archbishop Emeritus Robert Duncan, chair of the Liturgy Task Force, said, “After the most participatory process of Prayer Book revision ever undertaken – enabled by internet access open to every member of the Church and firmly grounded in the Prayer Book tradition, especially the Book of Common Prayer 1662 – these texts will form Anglican believers of the 21st century, just as previous Prayer Books have done for the last five centuries.”

The College was reminded that the principles undergirding these revised texts are continuity, memorability, poetry (musicality), and clarity. Additionally, missional concerns and an eye to the evangelical, catholic, and charismatic streams that are the Anglican Church in North America have resulted in clear adaptability to local circumstance.  This has been combined with an effort at maximum rubrical flexibility, without compromise of the “faith once delivered” as Anglicans have consistently held and expressed that faith. “The task for 2018 is attention to the feedback (liturgytaskforce@anglicanchurch.net) on all the other Prayer Book texts now in use – lesser offices, initiatory and pastoral rites, rites for Lent and Holy Week, and the Psalter – so that the Book of Common Prayer 2019 can be ready for the tenth anniversary of the formation of the Province,” said Archbishop Duncan.

Catechism – We voted unanimously to approve the revised edition of the Anglican Church in North America Catechism, To Be a Christian. Based upon two years of feedback from across the Province, the Committee for Catechesis undertook a comprehensive revision of the Catechism, resulting in the edition now approved. While revisions of Scripture references and a few other minor elements remain to be finished, the Catechism is now essentially complete. All remaining work will be completed by Pentecost, and the official edition should be available for download shortly thereafter. Printed copies of the official edition will be available in paperback and hardcover in 2019.

Since its initial release as a public working document, the Catechism has been translated into more than 15 languages, and is actively being used throughout the Anglican Communion. The Committee for Catechesis is now working to develop a mobile catechism app that can be used both domestically and internationally. With the Catechism complete, the Committee will be looking for opportunities to further promote the renewal of catechesis in partnership with dioceses, networks, seminaries, and individual churches.

The Election of Bishops – After a time of prayer and through the direction of the Holy Spirit, we elected two suffragan bishops for the Special Jurisdiction of the Armed Forces and Chaplaincy, the Rev. Mark Nordstrom and the Rev. Michael Williams, to work under Bishop Derek Jones. Both Chaplain Nordstrom and Chaplain Williams had served as chaplains in the U.S. Army and Air Force, respectively; most recently, both have been on the senior staff of the Special Jurisdiction. We are committed to supporting our chaplains and those they serve, and we believe Suffragan Bishops-Elect Nordstrom and Williams will be effective in doing this with humility and courage.

With the announcement of the planned retirement of Bishop Bill Murdoch of the Anglican Diocese in New England, the Bishops also approved the holding of the election of his successor, which will occur in November 2018.

Women’s Orders – Last September, we began an in-depth conversation on the final report of the Theological Task Force on Holy Orders, particularly women in Holy Orders. The time was fruitful, but it also became evident that the final resolution of this issue was not on the near horizon. More on this topic can be read here, but, simply put, we committed ourselves to showing one another Christian charity while we seek greater clarity.  We realize that real change will come through hearts and minds being transformed by the Holy Spirit as we pray and seek the mind of Christ together.  This conversation includes not just members of the Anglican Church in North America, but also our global Anglican and ecumenical partners.  We again spent time this week intentionally engaging each other on the topic of women in Holy Orders. Archbishop Beach has appointed a working group to help design the specific ways our conversations can continue, and we will move forward in unity to carry on the good witness and work that God has given us to do in North America. We remain steadfast in our life together.

Global Fellowship – We heard an encouraging report from Bishop Andy Lines, Missionary Bishop to Europe, who shared about the unfolding reformation taking place in the United Kingdom and Europe.  We also heard a preliminary report on the preparations being made for Gafcon 2018, and we are excited to come together in Jerusalem to celebrate the 10 year anniversary of this renewal movement in global Anglicanism.  As bishops of the Anglican Church in North America, a province birthed by Gafcon and an official partner of the Global South, we give thanks for these fruitful relationships that the Lord has enabled for the building up of his Kingdom.

Our time together has been challenging, refreshing, and illuminating. We have a clear sense of our calling from God to continue our strategic plans to reach North America with the transforming love of Jesus Christ, and to do so while maintaining the bonds of peace. The harvest is indeed plentiful. There is much to do, but we must not be overwhelmed and shrink back from this sacred call. It is to sharing the Gospel and its benefits to the world that we pledge our lives, resources, and energy.